The Fall – An Explanation of Sin and Suffering 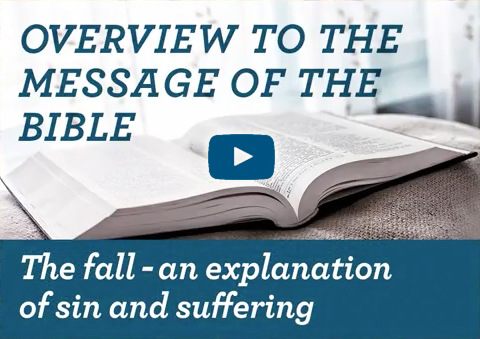 Tell about an unhealthy food or bad habit that you find irresistibly tempting.

Have you ever given into a temptation that you deeply regretted later on? (Only share if you are comfortable to do so).

A look at the Bible

And the Lord God commanded the man, “You are free to eat from any tree in the garden; but you must not eat from the tree of the knowledge of good and evil, for when you eat of it you will surely die.

You will not surely die,” the serpent said to the woman. “For God knows that when you eat of it your eyes will be opened, and you will be like God, knowing good and evil.” When the woman saw that the fruit of the tree was good for food and pleasing to the eye, and also desirable for gaining wisdom, she took some and ate it. She also gave some to her husband, who was with her, and he ate it. Then the eyes of both of them were opened and they realized they were naked…

What is one of the things you find most disappointing about our planet as it currently is?

What does the Bible (in Genesis 3 to 11) explain as being the root of the problem? Are we capable of breaking free of this addiction without His help?

With regard to our sin, what does God want from us, and why?

QUESTION: The Bible says that the root of our problems is in our hearts. Does this explanation make sense to you? What do you think of the alternative idea common in Western thought: that humans are actually mostly good, and capable of fixing our world’s problems without God’s help? EXPLANATION: The Christian view of human nature stands in contrast to the modern ‘secular’ or ‘humanistic’ view. The secular view assumes humans are essentially good – even though we still have ‘a bit of Hitler in all of us’ (to quote John Lennon). This view found its modern expression following the ideas of Jean-Jacques Rousseau who lived in the 18th Century, who suggested that humans might be instinctively good rather than evil, and that the problem might be government and religion rather than the human heart. This led to the French Revolution to overthrow the ‘constraints’ of the government and religious systems in France, and these ideas have led to many similar revolutions since. These views lead to a belief that we humans are actually capable of fixing the world’s problems by ourselves – coming from the assumption that we are naturally good. All we need to do is to get rid of whatever it is that is stopping us becoming all that we can become (if only we could work out what it was from a secular viewpoint). We see this thinking playing itself out in various violent revolutions that have sought to bring about a perfectly secular society by attacking the perceived problem – the worst being Communism and Nazism, which were both pursued as attempts to improve the world. These attempts to bring about good through the removing of certain government and religious restraints (and the imposition of others) were quite ironically responsible for more deaths in the 20th Century than all religions combined in the past 2000 years. Indeed it has been shown that the opposite of bad religion (which they sought to overthrow) is not no religion (secularism)! It is good religion! Modern secular attempts at globalization and global government are based on these same kinds of thinking. If ever achieved, a global government would be similar to what was happening at the Tower of Babel in Genesis 11 where the people of the earth united without regard for God. God saw that there was no limit to what they were capable of – referring surely to their potential for evil (because he has no reason to fear their actual power). The Christian view – in contrast, would suggest that history has already shown us enough times that evil is in our hearts, and that ‘absolute power corrupts absolutely’. Without God in the picture to help us, we are destined to repeat history. We actually do need God’s help – and the starting place is humility to admit this!

What do we learn about God from this account?

Can you see areas in your own life where sin has a grip on you? Are there any habits or behaviours you could confess to God, and ask Him to help you change?

Dear God, we recognise that we have made a mess of our planet through our choices. Our sins, both great and small, have produced so much suffering. We admit our wrongs, and that we need your help to change.

Please forgive me for the wrongs I have done, and help me to change. Show me the things I can do each day so I can become better. Help me to break free of wrong ways of thinking and living, to embrace new and more healthy patterns. Throughout my life, help me to become more and more like Jesus – your Son on earth, and the most selfless and loving person to have ever lived.

Send us your details and receive an encouraging email reminding you of the next tutorial: